PREMISS project deals with Contaminants of Emerging Concern (CECs) focussing on soils and sub-surface media. The aim of PREMISS is to build a robust and flexible prioritization prototype, enabling update and improvement such as substance and data addition.

To offset the current lack of data, PREMISS team aims to develop a modular prototype prioritisation tool for CECs allowing the estimation of CECs occurrence and their associated risks in the soil and the sub-soil for various levels of data availability (including missing or partial information).

For that, several complementary tasks are planned:

Anthropogenic activities (agricultural, industrial and households) release thousands of synthetic chemicals in the air, soil, and water [1] environmental compartment. These substances, which fall under the REACH regulation are potential candidates as Contaminants of Emerging Concern (CECs) regard to environmental quality. Despite the fact that CECs have risen increasing attention and work over the past recent years for the water compartment (surface water mainly), there has been hardly no attention to soil as a receptor of CECs. PREMISS project proposes to develop a prioritisation approach 1) to assess which CECs is likely be present in soils and subsoils, 2) to evaluate which of these CECs may pose human health and/or environmental risks and 3) to select which CECs require most attention and additional understanding, from management, policy and R&D perspectives.

One of the major challenges of the project is to develop a robust methodology. The challenge lies in the very large number of chemical substances to consider and the lack of existing data. The lack of existing data results in uncertainties associated to the assessment of substances fate and transport and their potential toxicity. Based on methodologies and tools already tested for the water media (surface and groundwater), the PREMISS team proposes to develop a rational strategy for CECs prioritisation applicable to soil and sub-surface. The PREMISS prioritisation approach will be driven by three principles: a) using the Source-Pathway-Receptor conceptual scheme for risk assessment; b) combining existing field data and calculated data; c) involving stakeholders to define their needs and draft recommendations.

The prioritisation approach will have the following specific objectives:

The consortium is constituted by research‘s teams from the 3 countries involved in the SOILVER call: RIVM and Deltares for the Netherlands, ISSEP, Arcadis and Witteveen & Bos for Belgium (Wallonia and Flanders) and BRGM for France (project coordinator). This will enable the collection of national data and wider European feedback and experience from their on-going work and current participation in European networks (NORMAN, NICOLE, EmConsoil, CIS Working Group Groundwater, etc.). 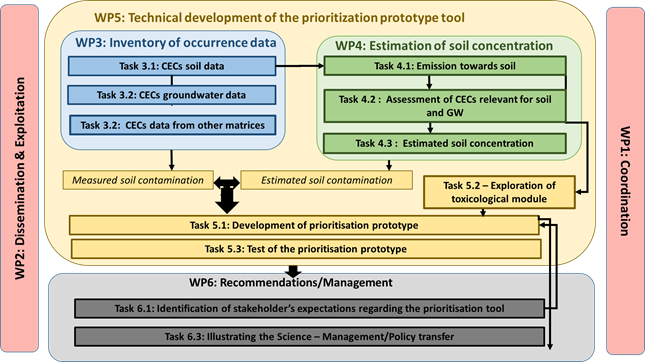